Caithness And Sutherland Councillors Hear About The Junior Warden Scheme 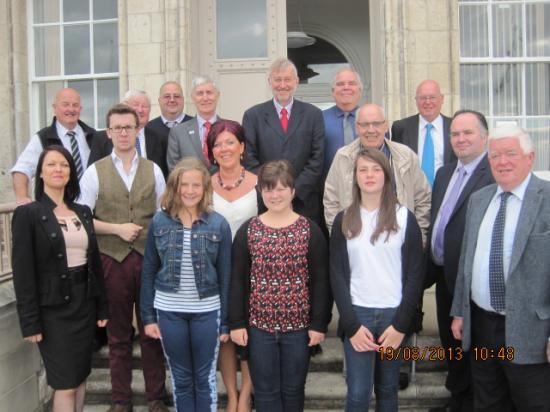 At meeting of the Caithness and Sutherland Area Committee held in Drummuie offices, Golspie on Monday 19th August 2013 members were updated on the pilot Junior Warden Scheme which took place recently in Thurso. Three of the participants, Amy, Marra and Lannie, gave an insightful presentation to the Committee on what they have achieved.

The Junior Warden Scheme, organised by HC Housing Tenant Participation Service and Community Safety Partners, was run over a twelve week period with twelve young people in their first year at Thurso High School. It was delivered by Ormlie Community Association who will continue to work with the group to allow them to identify further projects to work on in the community. This will encourage the young people to gain skills in community development and will count towards further awards in volunteering - they all received Saltire Awards for Volunteering.

Area Leader, Councillor Deirdre Mackay said "This is a fantastic scheme that encourages young people to play an active role in their communities. As well as undertaking a massive litter clearance we heard today about how they became involved in all kinds of constructive activities such as community walkabouts to identify, first aid and visits to Key Housing Association, Police Scotland, Fire Service and the SSPCA and much more. This provided the youngsters with valuable insights into the different challenges facing our communities as well as the important support that can be provided through voluntary activity. We are delighted to continue to actively support this worthwhile project.''

Caithness Civic Leader, Gail Ross added "It was great to hear the positive outcomes that these young people had and there's no doubt it has made a difference in the local community. We are now focussing on trying to role it out to the other five secondary schools in Caithness and Sutherland. Projects like this really benefit our young people, increasing their confidence and understanding of what it takes to be a good citizen. I hope now that other areas can benefit from this as well."