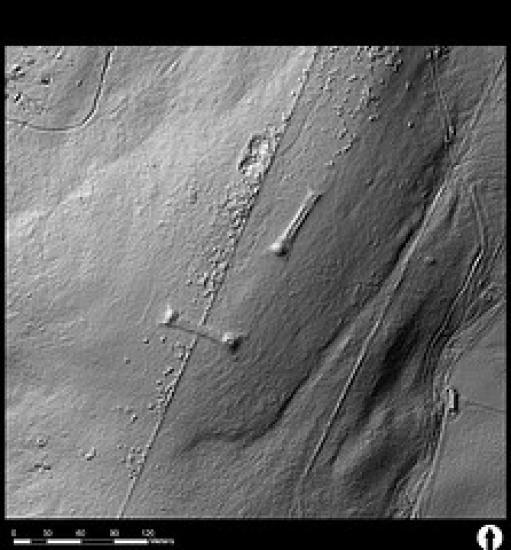 Explore the landscape with this great tool that allows you to move around the map.

The development of a windfarm at Baillie Hill was granted planning permission subject to a number of conditions. One requirement was for the scheme to include measures to improve public access to the Hill of Shebster and Cnoc Freicedain scheduled ancient monuments; and for improved interpretation of the cairns, incorporating the results of a LiDAR laser scanning survey.

In response to this requirement Baillie Windfarm Ltd commissioned AOC Archaeology Group to carry out a LiDAR survey, using high-resolution scan data to produce detailed terrain models of the landscape surrounding the wind farm. The main focus of the survey was Cnoc Freiceadain, a prominent shoulder rising above the northern coast of Caithness, which is the site of a group of Neolithic monuments including two long cairns and a series of stone settings.

LiDAR data was collected at a resolution of better than seven points per square metre. This data was used to process a series of terrain models. Data from the National Monuments Record (NMRS) and Highland Council HER were overlain on the data and systematically inspected for the presence of undetected features. Using a range of analytical hillshading techniques, designed to alter the lighting angle of the terrain, a wide range of unrecorded features were identified.

The resulting datasets provide a detailed record of the landscape prior to construction of the windfarm, and form an invaluable enhancement of the site archaeological record. Over 300 possible sites, previously unlisted in the NMRS and Highland Council HER were recorded. This web resource was created to ensure that the data reached as wide an audience as possible.

Go to A Window on Caithness Past