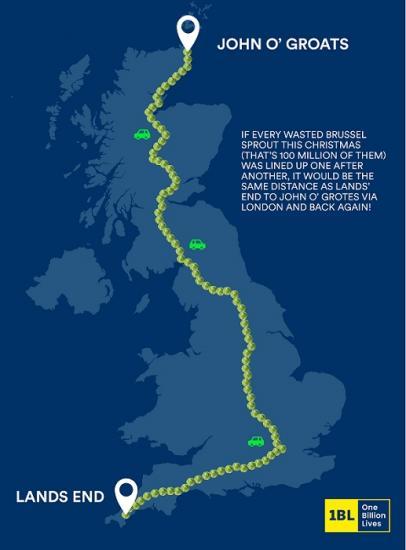 100 MILLION BRUSSEL SPROUTS AT RISK OF DUMPING THIS CHRISTMAS...

New nationwide survey reveals the top foods in jeopardy of ending up in the bin this Xmas.

100 million (97,500,000)* Sprouts are expected to end up in the bin this festive season as nearly one in six Brits (13%) admit that they plan to bin their leftover sprouts this December.

This amount equates to the weight of 77 double decker buses (1mkg)**, nearly the size of Manchester (115km2)*** or more than the distance (2925km) from Cornwall to John O' Groates via London and back again (if every Brussel Sprout was lined up one after another).

In the nationwide survey of 2,000 Brits, commissioned by One Billion Lives and YouGov, it has also been revealed that Christmas Puds are also at risk with nearly one in five (17%) of Brits claiming that a decent portion will end up in the bin come January. A quarter (24%) of Brits are also turning their back on the rich Christmas Cake in favour of the bin.

Surprisingly, Chocolate (25%) topped the list of waste culprits with Turkey coming in a close second (24%) claiming that these foods would be left over and are usually unfinished.

A fear of running out of food is driving Brits to over stock this Xmas with 72% of Brits admitting ‘it's better to have too much than not enough'. One in 10 (9%) also revealed that they wouldn't know how to give away their leftovers to people who want or need them and instead one in three would throw them in the bin (34%).

When it comes to knowing what to do with that spare Christmas pudding or that spare tray of mince pies, only 3% claimed that they would give it to neighbours or food banks.

Tessa Clarke, co-founder of food sharing app and social enterprise, OLIO, said that while this new research is a stark reminder that the food waste issue starts at home, there are simple steps we can take to reduce our food waste footprint this season.

‘'We now know that 50% of all food waste* takes place in the home and unfortunately, we find that Christmas only exacerbates the issue. However, the research also reveals that a third (33%) of Brits feel a sense of guilt about the amount of food that they’re wasting. This tells us that people are highly aware of the issue and are looking for ways to reduce their food waste".

Founded in North London, the OLIO food sharing platform has helped over 1.5 million users to share 2.8 million portions of food that would have otherwise gone to waste.

CEO of Social Enterprise UK, Peter Holbrook said that the indulgent Christmas period often heightens our awareness of the many global issues we’re facing yet there are many social enterprises we can partner with to help us do our bit.

‘’By partnering with SAP to create new content platform, One Billion Lives, our mission is to help showcase the stories of social enterprise to guide consumers (and businesses) on the many thousands of brands - like OLIO - that people can get behind to support environmental and / or social change.’’

"Social enterprises are showing us that another way of doing business is possible. They are set up to make a difference- taking on some of the biggest issues we face"

It's more fun than it sounds I promise, but a little bit of planning is the key to avoiding the waste this Christmas! With lots of people coming and going, it can be really helpful to write a meal plan for the festive period, and then make sure you shop to that plan - that way you avoid all the temptations in the shops. A little bit of counting can also go a long way - on the big day for example I always count the number of guests and then calculate how many roasties per person, and make sure to only prepare that many. It's an amazingly simple but effective tip.

Some of the best meals I've ever tasted have been made from leftovers. Even things that feel like they really shouldn't go together, can! My go to at this time of year is bubble and squeak - mash up all the potatoes, mix in the veg, lightly fry and then serve with baked beans, voila. Turkey vol au vents is another favourite from my childhood, and something that will always be associated with Christmas for me.

Even with all the best intentions in the world, it can be impossible to avoid having spare food at this time of year - whether it's an extra tray of mince pies, unwanted gifts from an Xmas hamper, or the onset of a January diet. Instead of letting them languish unloved, why not make a neighbour's day and pop it on the OLIO app? Sharing is caring after all.