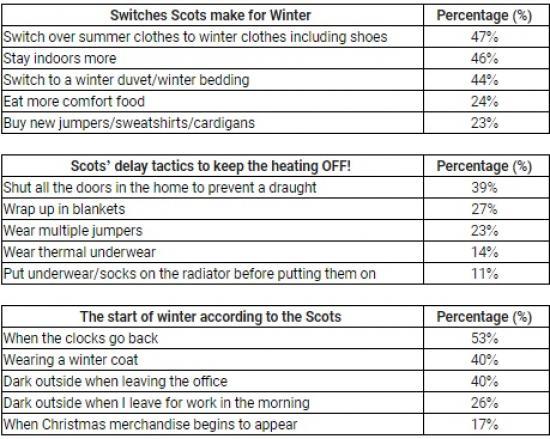 7 in 10 Scots delay switching their heating on to save money.

HARD-UP Scots are delaying turning their heating on this winter and instead wrapping up in blankets to save money, according to a study.

Research for leading comparison site Moneyexpert.com, found that a shocking 70% of Scots are putting off switching their heating on ‘til as late as possible because of concerns over energy costs.

Instead they wear extra jumpers (23%), wrap themselves in a blanket (27%), or even don thermal undies to keep warm (14%). And many of those who do switch the central heating on are keeping the thermostat lower than they'd like in order to cut bills.

And these delay tactics appear to be causing a fair bit of disruption in households across Scotland. A quarter (25%) of Scots argue about whether or not the heating should be on, with the same amount quarrelling with their housemates over the lights being left on (25)! 15% of Scots go one step further, and heavily debate what exact temperature the heating should be at too!

The cost of winter is a pressing concern for Scots, with over three-quarters (77%) envisaging their energy bills rising, averagely expecting to spend over £300 across the cold season.

The research sparked concern from Jason Smith, CEO of Moneyexpert.com. He said: "It's all very well trying to save money on energy bills, but there are better ways of doing it than shivering in the cold. Older people especially must keep themselves warm or it can be very dangerous.

"The smart thing for people to do is to check their energy costs and make sure they're on the cheapest deal possible. The average household can save £190 this winter by going to a comparison site like Moneyexpert,com and switching. That would buy a great deal of jumpers and blankets!"

Save money on your energy bills. Visit https://www.moneyexpert.com/gas-electricity/