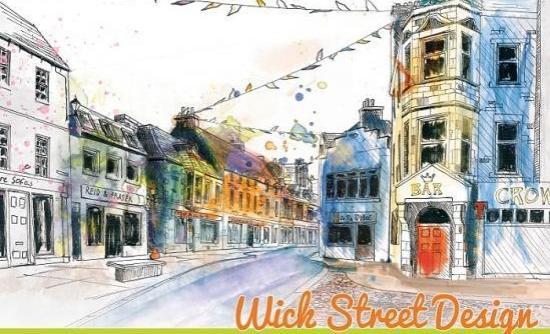 More than 80 Wickers gave up their time last Thursday to suggest improvements to High Street and Bridge Street.

The feedback formed part of The Wick Street Design project which is being delivered by Sustrans Scotland and funded by Transport Scotland in partnership with The Highland Council, Royal Burgh of Wick Community Council and Local Councillors.

Last week, the Sustrans Street Design team delivered a number of community activities at Caithness House and The Pulteney Centre which encouraged locals to re-imagine the High Street as an inclusive space for everyone to spend time in and travel through on foot or by bicycle.

Participants provided valuable insight that reflected the needs and aspirations of the local community.

As part of the engagement sessions, a youth group from Pulteneytown People's Project and local residents painted a bench outside of Caithness House. The new bench with an accompanying planter can be seen on High Street along with three new planters in front of Market Square courtesy of Wick Hanging Baskets.

It is hoped that, on top of adding more greenery, these will stand as a symbol of the potential for Wickers to transform the High Street.

Kasia Koziel, Sustrans' Project Lead said: "We've really enjoyed our week in Wick getting to know the community and we would like to thank everyone that joined us. Our team were overwhelmed by the enthusiasm of the participants and their willingness to embrace the project.

"After considering some of our earlier consultations with residents, we decided to add the new, colourful bench as a focal point in the High Street. We would love to hear feedback and to know what your thoughts are and whether you would be interested in the bench becoming a permanent fixture."

The discussions and findings from the activities throughout the week will be used to inform the Wick Project team and allow them to develop design ideas.

Keep an eye out for the Wick Street Design Project's next public event in the last week of November where activities will take place to allow locals to further develop the ideas and opportunities raised last week.

Those unable to attend last week's community activities can provide feedback at https://wick.commonplace.is/comment where information and news updates are available on the wider project.