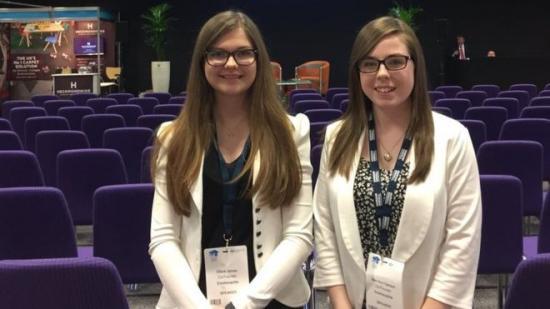 Two high school pupils have created an app designed to encourage children to enjoy the outdoors more often.
Mari-Ann Ganson and Ellora James, who are both 17, created Envirocache for an apps competition.

The Wick High School students' app draws on geo-cache technology to provide children with nature treasure hunts while they go for walks.

Ellora's work on the project has helped her to win 2017's Scottish Women in Technology One to Watch award.
She said: "It's so humbling to be at the beginning of my journey and yet still recognised for my passion for technology.
"I hope that I can use this success to continue to be a role model for others, work to improve diversity in technology and show how schools can work to encourage this too."

The teenagers received help from Interface, an organisation that provides support in developing products.
It matched the pair with an academic at Aberdeen's Robert Gordon University to develop their app.

Wick High School has built a reputation for its students making new applications for technology.

The official opening of the Wick Community Campus took place on a sunny Saturday 16 June 2018.  Lord Lieutenant John Thurso performed the unveiling of a plaque to mark the occasion.
[Secondary Schools]
20/5/2017