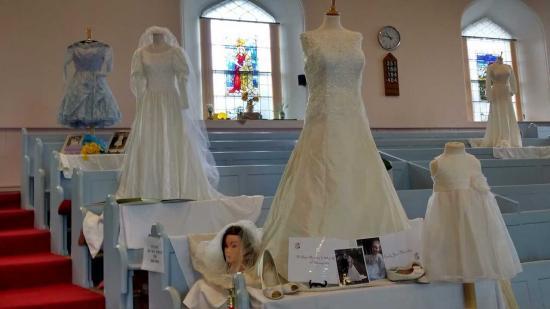 The ladies of St Fergus church rallied round to help Caithness Health Action Team (CHAT) with yet another fund raiser. Each year they choose a cause to support either abroad or local

This year they decide to help CHAT in their efforts to stop continued reduction in local health services by NHS Highland. Some of the ladies who visited the display were in their 80's and 90's determined to show their support and spoke about the many times they or their families had used health services locally and in particular maternity services in Caithness.

On Friday 18th October four of the CHAT's team visited the new Balfour Hospital in Kirkwall, Orkney.   The main purpose of the visit was partly to see then hospital but in particular how maternity services work there.
[Churches]
22/7/2019

HUNDREDS of photographs of Wick life spanning more than half a century are to go on show during the town's gala week.   They will form an exhibition called The McDonald Collection being held at the St Fergus Church Hall for one day only on Wednesday, 31st July 2019.
[Medical Services]
3/7/2019

A popular resource for pregnant women and their families has been updated to include the latest information on perinatal mental health support.   A refreshed edition of Scotland's ‘Ready Steady Baby' publication was launched today by Minister for Public Health Joe FitzPatrick.