All The Stations Pair Arrive At Wick After 104 Days 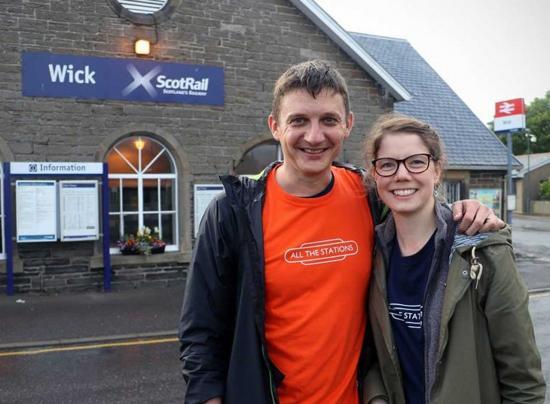 Vikkie Pipe and Geoff Marshall have spent 104 days travelling to every station in Britain. They have videos all along their route and kept up an endless stream of photos and contacts on social media.

Wick was station 2563 - wow what feat of endurance on trains to see all the stations and get off at all of them.

Shortly the final few films of their last stations in Scotland will be going up so take a look wither at the latest ones or dip in to see the stations near you or you know from previous visits. Apart from the main videos there are side videos on railway topics along the route. All the clips are peppered with interesting facts about the places near to the stations and individually make nice short films to fill a few minutes with Geoff and Vikki's light hearted banter as they go along.

Very entertaining and informative and a growing audience are checking them out as can be seen by the growing viewing figures. Well worth a look if you have not been following the trip already.

As small memento of the arrival Bill Fernie gave them a small Caithness flag.

We will link to the final one once it appears in a few days.

Well done to Vikkie Pipe and Geoff Marshal for a great idea and for your staying power to complete All The Stations.

See a few photos of Geoff and Vikki at Wick Station