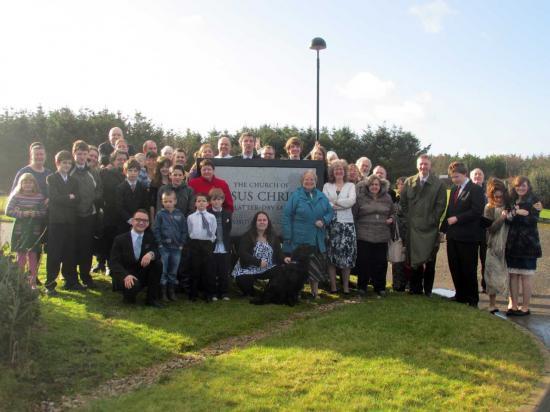 Barbara Haywood chuckles as she remembers one particularly memorable Sunday. Members of her church were meeting in the Thurso Youth Center, which also was a hostel at the time. Some young backpackers, dressed in pyjamas, wandered into the hall in the middle of the Sunday morning worship services. “They were just as taken aback as we were!

They went into the kitchen, and a few minutes later, sheepishly came back through with their mugs and bowls of cereal.”
The Thurso branch of the Church of Jesus Christ of Latter-Day Saints (“LDS”) has had a long history of these ‘memorable’ Sundays. The branch was formed in 1962, and first began meeting in Thurso Town Hall, in the building that is now Caithness Horizons. Sometimes, the janitors would forget to open the doors on a Sunday morning, so the branch members would stand around a bit, wondering what to do. “Then someone would say, ‘Well, you can come to my home.’ We would go, and squeeze in like sardines,” as Barbara recalls.

In the years since then, the branch has met in Miller Academy, the Park Hotel, Stewart Pavilion and the High School in Thurso, as well as in Mey Hall and Wick Assembly Hall.

Finding a place for holding midweek activities was equally challenging. There were meetings in the Youth Club and Ross Institute in Halkirk, in Scots Calder Hall, in member’s homes throughout the county, and Easter egg hunts at Scrabster Hall. For Christmas celebrations one year, the branch re-enacted the nativity in a member’s barn. “It was very authentic,” said Barbara, “We were sitting on hay bales, and they had sheep, hens, lots of animals. And then a big rooster came out, crowing loudly, right in the middle of the nativity!”

Not having their own building also meant lugging all the equipment back and forth each Sunday. Members would share the burden, carrying boxes of hymnals, microphone and speaker, podium, an electric keyboard, and other items. Most often, these would be left in the boot of several cars, until needed again the next week. Members also shared the work of setting out chairs each week, and vacuuming and tidying up after meetings.

“Getting a building is a faraway dream that we always had. ‘If only we had our own building,’ we’d say.”

Finally, the ‘faraway dream’ has come true, as membership has gradually grown from just a few people to over forty. Last Autumn, the president of the branch, Graham Winkle, signed a long-term lease for a building in the Thurso Business Park, just across from the BT building. To celebrate the official opening of the building, area church officials will be coming from Edinburgh in April, and the branch will host an open house on April 26 for community members to come and tour the new location.

President Winkle is especially glad for the new building, since his car was often used to store church supplies. “I'll miss the strange looks I used to get in the car park when people would see the hymn board and amp in the back of the car, but It will be nice to finally fit all the kids in the car!”

The Church of Jesus Christ of Latter-Day Saints in Thurso has received a fibre glass replica of a historical stone, which will be displayed on Saturday, 26 April from 1-5pm during free tours of the new Thurso meeting house.   The stone was originally part of a building in Stirling, where its inscription, ‘What E’er Thou Art, Act Well Thy Part,’ inspired a young man named David Oman McKay as he struggled with homesickness.