Maureen and Gordon Doull from Wick have celebrated their 50th wedding anniversary at Mackays Hotel and asked their guests to make donations to Caithness Health Action Team (CHAT) as they are so concerned at what is happening to health services in Caithness.   The couple handed over a £750 to Bill Fernie, chairman of CHAT and founder member Councillor Nicola Sinclair.
[Medical Services]
7/9/2017

Caithness Health Action Team (CHAT) has gathered 2,410 postcards from members of the public protesting the centralisation of health services under NHS Highland.  The postcards carry the slogan ‘100 miles too far' in reference to the 100 mile journey patients frequently have to travel to receive basic care.
[Medical Services]
15/5/2017

Caithness Health Action Team.   CHAT's decision to withdraw from the Caithness Maternity and Gynaecological Group should make every politician sit up and take notice.
[Medical Services]
15/5/2017 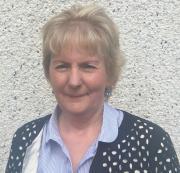 Candidates standing for Caithness, Sutherland and Easter Ross in the General Election have been challenged to spell out what action they would take to support local health campaigners if elected as an MP.   Scottish Labour's Olivia Bell said she was keen that the action part of supporting the local community wasn't lost in hot air and fine words.
[Medical Services]
13/5/2017

Well it looks like almost everyone in the area has used Caithness General at some time.   CHAT will discuss at its meeting in the Park Hotel, Thurso whether to sponsor a candidates for the Westminster election on 8th June.
[Medical Services]
19/4/2017 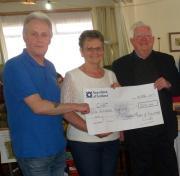 Caithness Model Club handed over a cheque for £500 to Caithness Health Action Team (CHAT) at the first day of their annual model exhibition in the Norseman Hotel, Wick today.   Chairman of CHAT Bill Fernie and committee member Liz More accepted the donation on behalf of CHAT.
[Medical Services]
8/4/2017

Caithness Model club today handed over another cheque for £500 to Caithness Befrienders.   The group who are involved in matching volunteers with people who might live alone have been increasing their activities.
[Medical Services]
5/4/2017

Posted on The CHAT Facebook page for our next action.   Evening firstly thanks to everyone who has supported us and offered help.
[Medical Services]
5/4/2017

Chairman of Caithness Health Action Team (CHAT), Bill Fernie received a big boost to the CHAT funds from Wick Community council when they handed over a cheque for £1000 to help with campaigning about Health related issues in Caithness.   Bill said,"The funds coming in show that we have a huge amount of support for our campaigns with the community making sure we can do things to highlight concerns at reductions across our services for health and the discomfort caused to mothers and families who need to travel to Raigmore.
[Medical Services]
26/11/2016

CHAT's treasurer has sent out a message about today's Funday with regard to the stalls funds - "Well done to everyone involved in the fundraising stall in the Market Square today, the total raised was £672.87 which is really great.  The total is for everything - raffle, donations, etc it includes the £40 that Bill received as donations." CHAT chairman Bill Fernie paid tribute to a great and dedicated group who are pulling out all the stops in their efforts to oppose NHS Highland plans to downgrade maternity services at Caithness General and he said, Once again people in Caithness have shown their generosity and that they are prepared to help ensure that funds are not a problem in taking the campaign forward.
[Medical Services]
25/11/2016

Much stress on safety issues and much of what is in the NHS report backs this claim up.  But is that the whole story? There are other issues that are impacted by a decision to remove the consultants.
[Medical Services]
25/11/2016

The maternity downgrading issue will be discussed at a public meeting tonight in Assembly Rooms, Wick.   The meeting starts at 7.00pm.
[Medical Services]
21/11/2016

Caithness Health Area Team - CHAT members and supporters will demonstrate outside Wick Town Hall when the Caithness Committee meets on Tuesday 22nd November 2016.   Meeting is open to the public but may be restricted once seats are full.
[Medical Services]
18/11/2016

The long-awaited report of Public Health Scotland (PHS) into maternity services at Caithness General Hospital was launched today, and recommends that the Henderson Maternity Unit moves to a midwife led model (CMU).  The Report concludes that Caithness does not have the population to support an obstetrician, and that the presence of specialists without the backup of intensive care facilities or a paediatrician creates unnecessary risk factors for patients.
[Medical Services]
17/5/2016

Maternity Unit In Crisis Consultants - Too Many Locums A new local lobbying group "CHAT" Caithness Health Action Team has been formed by a group of local Caithness people concerned about a variety of matters affecting health services in Caithness.   These vary from Maternity where many more mothers in recent times are being sent to Raigmore hospital in Inverness, Lack of consultants, Locum cover, Lack of GP's.
[Medical Services]
15/12/2003

Tune in to Moray Firth Radio to hear George Bruce chairman of the Caithness & North Sutherland Health Forum being interviewed about the current Maternity Review to coincide with Professor Calder's visit to Caithness General Hospital.   Listen on radio or on the web by going to Moray Firth Radio web site and click on Listen.